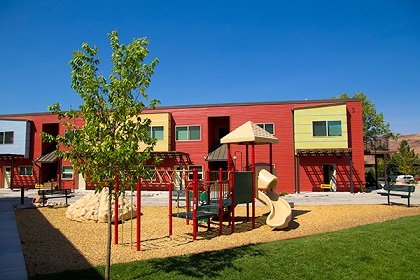 With just over 5,000 year-round residents, Moab, UT is a base for outdoor adventure. This beautiful, small rural town draws one-time tourists and long-term vacationers alike, the latter of whom buy up second and seasonal homes, driving up the cost of housing for the community’s workers. On top of that, the region’s tourism economy means that wage growth is limited or stagnant, and poverty is prominent.

Due to these factors, the City and County teamed up to tackle the issue of housing availability and affordability through the development of a 60-unit complex: 15 one-bedroom, 30 two-bedroom, and 15 three-bedroom apartment units. Known as Cinema Court, the apartments are grouped with nine buildings facing a central courtyard that houses a playground for resident children. The apartments are homes to families making up to 50% of the area median income.

The project was initially intended for affordable single family residences, but after the housing market collapse, a multi-family project became more feasible. The project benefits from reduced construction costs because the housing is attached and served by existing city infrastructure, including water, sewer, roadways, bike lanes, and multiuse paths. Cinema Court has been a huge success and the City plans to build similar projects in the future.

Learn more about their project and funding, and lessons for other rural resort communities, including proactive planning, partnerships with highly-skilled affordable housing developers,